Players zoomed around the arena and crashed into boards. The audience cheered as the puck approached the goal. The goalie jumped into action, blocking the shot.

In the midst of the 2019 Stanley Cup playoffs, a hockey tournament of a different sort was playing out at the Johns Hopkins Homewood campus.

Engineering undergraduate and graduate students in the Whiting School’s Mechatronics course spent the spring semester designing, programming, and building autonomous robots to compete in a game of hockey. On May 8, the robot teams went head-to-head in a tournament to see who would take the trophy – or, in this case, a good final grade.

The objective of the Mechatronics course, taught by Jeremy Brown, John C. Malone Professor of Mechanical Engineering, is for students to learn the fundamentals of mechanism kinematics, motors and sensors, and interfacing and programming microprocessors.

For the final project, the students were divided into teams of three or four people from various disciplines, such as mechanical engineering, robotics, electrical engineering, and biomedical engineering. Each team built two robots for the tournament: a goalie and a forward.

“We each brought our own specialties to the project,” said Sarah Denenberg, a senior computer engineering major. “Mechanical engineers worked on 3D modeling and the mechanical design, and the electrical and computer engineers focused on circuits and coding. Then we had to put it all together to make a system that would work in the rink.”

Once the robots entered the rink, students had to sit back and trust their programming.  A camera sensor, fixed to the ceiling, tracked the players by color codes attached to the robots. The camera then sent x and y coordinates to each team’s forward. The main challenge of the project was to create control systems that could process these coordinates and determine where the robot should move next. 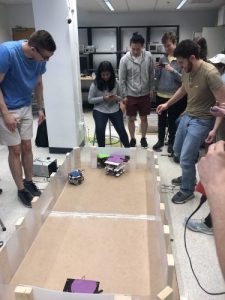 “Each team took a different approach to their robotic system. My team decided to make a fixed goalie with no wheels. Instead, we put a good portion of our budget toward building a robust forward that could push hard against the opponent,” said Momin Mohis, a senior studying biomedical engineering and economics.

Robot hockey proved to be an open-ended but creative challenge, according to the students. Because they are complex systems that integrate several different engineering fields, robots are a good example of how to apply engineering to real-world applications.

“This project taught me how to take real-world constraints and translate that into my software. Robot hockey was a really fun way to see how my software would function in real life,” said Mohis.