When you have a headache and reach for the pain reliever, you’re probably not thinking about your body position when you take the pill. But a new Johns Hopkins University study finds your posture can make a big difference in how fast your body absorbs the medicine, and the wrong posture can delay how fast the medicine is broken down and absorbed—by as much as an hour.

The findings are based on what’s thought to be the first model to simulate the mechanics of drug dissolution on a human stomach.

“We were very surprised that posture had such an immense effect on the dissolution rate of a pill,” said senior author Rajat Mittal, a Johns Hopkins engineer and an expert in fluid dynamics. “I never thought about whether I was doing it right or wrong but now I’ll definitely think about it every time I take a pill.”

The work is newly published in Physics of Fluids.

In recent years, models have been created to authentically represent the workings of several major organs, notably the heart. The model developed by the team, called StomachSim, appears to be one of the first to be able to conduct realistic simulation of the human stomach. Blending physics with biomechanics and fluid mechanics, StomachSim mimics what is happening inside a stomach as it digests food, or in this case, medicine. 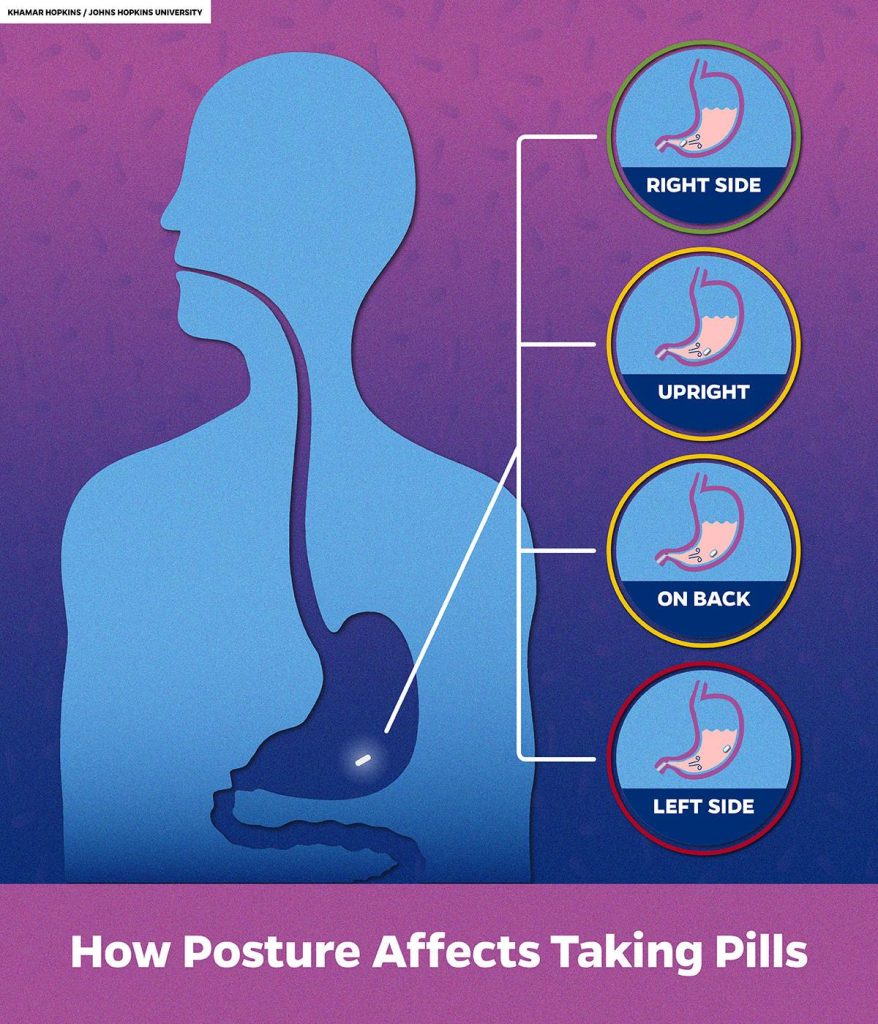 The team tested four postures. Taking pills while lying on the right side was by far the best, sending pills into the deepest part of the stomach to achieve a dissolution rate 2.3 times faster than even an upright posture. Lying on the left side was the worst. The team was very surprised to find that if a pill takes 10 minutes to dissolve on the right side, it could take 23 minutes to dissolve in an upright posture and over 100 minutes when laying on the left side.

“For elderly, sedentary or bedridden people, whether they’re turning to left or to the right can have a huge impact,” Mittal said.

Standing upright was a decent second choice, essentially tied in effectiveness with lying straight back.

The team also considered what stomachs that aren’t functioning at full strength meant for pill dissolution. Even a small change in the conditions of the stomach can lead to significant differences in the outcome of an oral drug, said lead author Jae Ho “Mike” Lee, a former postdoctoral researcher at Johns Hopkins.

The impact of stomach disease, such as gastroparesis caused by diabetes or Parkinson’s disease, on drug dissolution was similar to that of posture—which underscores how significant a difference posture makes.

“Posture itself has such a huge impact it, it’s equivalent to somebody’s stomach having a very significant dysfunction as far as pill dissolution is concerned,” Mittal said.

Future work will attempt to predict how the changes in the biomechanics of the stomach affect how the body absorbs drugs, how food is processed in the stomach and the effect of posture and gastroparesis on food digestion.