While CAFs have been extensively studied in terms of how they promote tumor progression, their origin remains a mystery. In the March issue of Biomaterials, Johns Hopkins researchers share promising findings on the underlying mechanisms by which breast cancer cells turn healthy cells into CAFs during early stages of breast cancer.

Cancer cells induce CAFs by delivering specific chemicals to healthy cells. In early stages, however, cancer cells don’t migrate far enough to physically reach healthy cells. This is because the tumor’s surrounding tissue is made up of dense fibers, called the extracellular matrix (ECM).

The question, then, is how do CAF-promoting chemicals manage to pass through the dense ECM barrier and reach healthy cells?

“Healthy cells are sometimes very far from the tumor, and cancer cells diffuse too slowly to reach them. The goal of our study was to understand how cancer cells modify the surrounding ECM and induce CAF activation at the early stage,” said Yun Chen, the study’s principal investigator and an associate researcher in the Department of Mechanical Engineering and Johns Hopkins Institute for Nanobiotechnology.

The team constructed a 3D in vitro model to mimic the in vivo tumor microenvironment of early-stage breast cancer. They observed that early-stage breast cancer cells generate strong forces to reorganize the ECM fibrils. In fact, cancer cells grab the fibrils using their finger-like protrusions and realign them – a process similar to someone rolling the thread differently on a yarn ball to avoid a tangled mess. 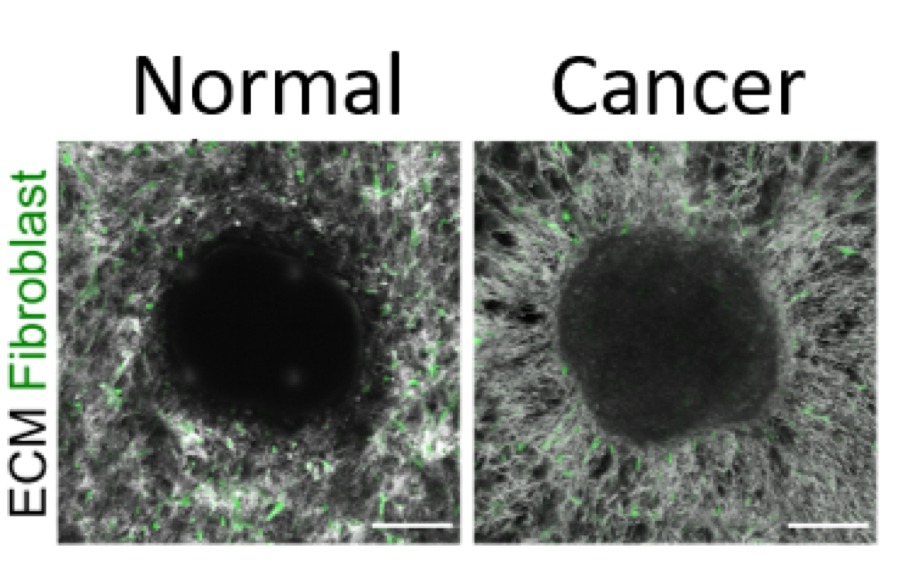 ECM fibrils were radially aligned by the cancer cells (right), while the fibrils remained network-like in the culture containing normal cells (left).

“Research has shown that biochemical factors contribute to cancer progression, and that’s true,” said Wei-Hung Jung, a member of the team and a PhD student in Chen’s lab. “We show here that biophysical factors also play a critical role in remodeling the ECM, and facilitate the delivery of cancer-secreted biochemical factors to healthy cells, turning them into cancer’s accomplices.”

Future research will focus on testing their hypothesis in vivo with a new cell therapy invented by the team. They will implant genetically engineered cells to counteract the ECM remodeling by cancer cells.

“ECM remodeling is important to establish the connection between cancer cells and the surrounding healthy cells. Essentially, we need to cut that connection to prevent the spread of cancer. The hope is that, eventually, we can implement this knowledge clinically to stall this ECM remodeling and stop metastasis,” adds Jung.

Other scientists who contributed to the research include Nicholas Yam, Chin-Chi Chen, Khalid Elawad, and Brian Hu of Johns Hopkins University.