Four Johns Hopkins University students have been awarded Goldwater Scholarships for their research and achievements in the fields of science, technology, engineering, and math.

Juniors Bruce Enzmann, Min Jae Kim, Shiker Nair, and Aaditya Rau are among a cohort of 410 Goldwater Scholars selected for 2021–22 from an estimated pool of more than 5,000 applicants.

Schools nominate up to four students from a pool of sophomores and juniors, selected for their research record and potential for leadership in STEM fields. 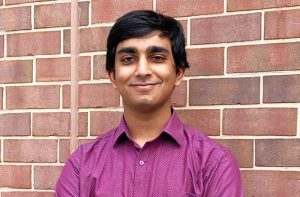 Aaditya Rau, a junior engineering mechanics and applied mathematics and statistics major, is working toward a career in advanced materials research in which he hopes to facilitate greater reliance on alternative energy sources. In Kevin Hemker’s lab, Rau is working independently on a PURA-supported project to characterize novel nickel-molybdenum-tungsten alloys, which are of interest in the creation of devices for extreme conditions in industries such as energy exploration and generation, aviation, and automotive. He is also continuing research he began this summer with the Princeton Plasma Physics Lab on the interactions between boron and graphite and how they can be applied in the development of nuclear fusion devices. Beyond his research, Rau contributes on campus by playing violin with the Hopkins Concert Orchestra and participating in the Hopkins Undergraduate Society for Applied Mathematics.

Excerpted from the Hub >>