Using X-ray measurements and analyses, a team of researchers led by a Johns Hopkins mechanical engineering professor have shown that velocity scaling and dispersion in wave transmission is based on particle arrangements and chains of force between them, while reduction of wave intensity is caused mainly from particle arrangements alone. The research appeared yesterday in the online edition of the journal Proceedings of the National Academy of Sciences.

“Our study provides a better understanding of how the fine-scale structure of a granular material is related to the behavior of waves propagating through them,” said Ryan Hurley, assistant professor of mechanical engineering at Johns Hopkins Whiting School of Engineering. “This knowledge is of fundamental importance in the study of seismic signals from landslides and earthquakes, in the nondestructive evaluation of soils in civil engineering, and in the fabrication of materials with desired wave properties in materials science.”

Hurley conceived of this line of research while a postdoc at Lawrence Livermore National Laboratory, collaborating with a team that included physicist Eric Herbold. The experiments and analysis were later performed by Hurley and Whiting School postdoc Chongpu Zhai after Hurley moved to JHU, with experimental assistance and continued discussions with Herbold.

Structure-property relations of granular materials are governed by the arrangement of particles and the chains of forces between them. These relations enable the design of wave damping materials and non-destructive testing technologies. Wave transmission in granular materials has been extensively studied and demonstrates unique features: power-law velocity scaling, dispersion, and attenuation (the reduction of the amplitude of a signal, electric current, or other oscillation). 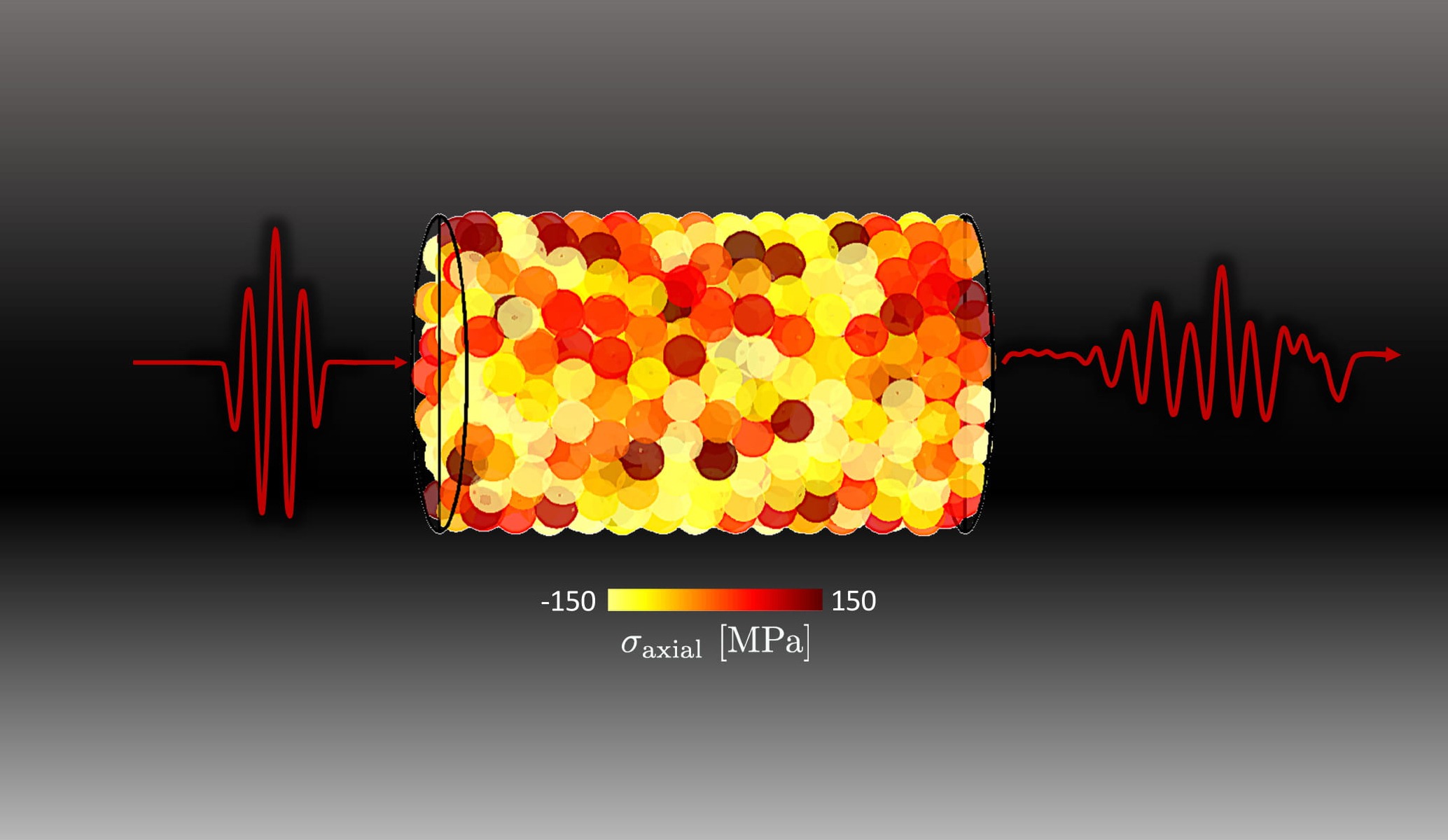 The image is a combination of two sets of data from X-ray scans of single crystal sapphire spheres. The reconstructed X-ray Computed Tomography (XRCT) data defines the surface of all 621 grains in the load frame. The far-field X-ray Diffraction (ff-XRD or 3DXRD) data provides a strain tensor that is mapped to each grain center. The combination and colorization of this data shows the distribution of stresses for each grain under load. This information was used as initial conditions for ultrasonic transmission measurements, where structure-property relationships were measured in-situ..

Earlier research dating back to the late 1950s described what may be happening to material underlying wave propagation, but the new research provides evidence for “why.”

“The novel experimental aspect of this work is the use of in-situ X-ray measurements to obtain packing structure, particle stress, and inter-particle forces throughout a granular material during the simultaneous measurement of ultrasound transmission,” said Hurley. “These measurements are the highest fidelity dataset to-date investigating ultrasound, forces, and structure in granular materials.”

“These experiments, along with the supporting simulations, allow us to reveal why wave speeds in granular materials change as a function of pressure and to quantify the effects of particular particle-scale phenomena on macroscopic wave behavior,” said Zhai, who led the data analysis efforts and was that paper’s first author.

The research provides new insight into time- and frequency-domain features of wave propagation in randomly packed grainy materials, shedding light on the fundamental mechanisms controlling wave velocities, dispersion, and attenuation in these systems.

This research was funded by the Johns Hopkins Whiting School of Engineering and LLNL’s Laboratory Directed Research and Development program, and was carried out at the Advanced Photon Source, an Office of Science User Facility, operated by Argonne National Laboratory.