Ninety percent of the Mid-Atlantic Ridge, a 10,000-mile mountain chain that runs along the north-south axis of the Atlantic Ocean, is underwater. In some places, however, it rises above the surface— as it does in Iceland, where it moves north before plunging into the Arctic Ocean for a 1,100-mile stretch known as the Gakkel Ridge. 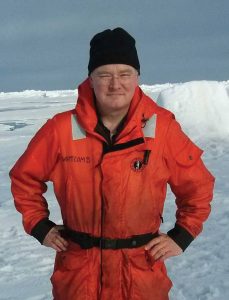 In October 2016, Louis Whitcomb, a Johns Hopkins professor of mechanical engineering, was aboard the icebreaking research vessel Polarstern, watching live video delivered by Nereid Under Ice, the remotely operated underwater vehicle (ROV) he developed in collaboration with the Woods Hole Oceanographic Institution. Attached to Polarstern via a fiber-optic tether slightly thicker than a human hair, the vehicle was half a mile deep in the Arctic Ocean’s frigid waters, training its camera on a lush bounty of coral, sea sponges, starfish, and shrimp.

“The top of the Karasik Seamount,” says Whitcomb, referring to a mountain along the Gakkel Ridge, “was teeming with life.” The expedition was the latest in a string of discoveries facilitated by Whitcomb and other robotics experts who, since the 1960s, have developed tools enabling oceanographers to explore—via submarines, ROVs, and autonomous underwater vehicles (AUVs)—what was once unreachable. On that day, in an ice-covered region, it was “the first time a vehicle of this capability operated on a seamount in the Arctic Ocean,” Whitcomb says. “It could maneuver freely near the sea floor, land, take samples, and bring them back.” And yet, he adds, “we only explored a very small section of the seamount. It’s a big ocean.”

Whitcomb’s right. Oceans cover 70% of the world’s surface, yet only a small percentage of them, he says, have been explored in detail for various reasons, not the least of which are dangerous conditions. Atop the Karasik Seamount, for example, the pressure is 75 times the amount at sea level, far too dangerous for humans, who, in scuba gear, don’t usually dive beyond 130 feet. And in excess of 600 feet deep, light from the surface no longer travels, turning the ocean pitch black. Hence the need for submersibles, which, like Nereid, can cost millions of dollars and are unable to rely on GPS. While satellite technology enables the Air Force to operate drones halfway around the world, “radio waves for data communication and GPS signals don’t work under the ocean,” Whitcomb points out. But for 25-plus years, Whitcomb, who founded and directs the Johns Hopkins Dynamical Systems and Control Laboratory, has been tackling these challenges by focusing on improving the navigation and control of robotic vehicles.

“He’s doing more than creating tools,” says Zak Harris, a former PhD student now working at Draper Laboratory, which developed the navigation system for the Apollo moon missions. “The same tools and principles he uses, we apply to our missions. They’re broadly applicable in the self-driving-car and drone worlds. Louis is phenomenal at forwarding robotic systems, which are the future of discovery.”

Ocean exploration, in particular, is important for many reasons. Studying everything from marine life to currents and the transport of gases and nutrients, oceanographers can demonstrate how the ocean impacts weather and food supplies. In Arctic regions, especially, where glaciers are melting at alarming rates, it’s a bellwether for climate change.

And the Mid-Atlantic Ridge serves as a mecca for the study of plate tectonics, or the movement of the Earth’s crust. Starting in the 1950s, oceanographers discovered volcanic activity along two ridges, the Mid-Atlantic and the East Pacific Rise, where the planet’s core bubbles up, cools down, and adds volume to the sea floor while enabling marine life to thrive, thanks to hydrothermal vents.

In 1977, one of the earliest human-occupied research submersibles, the Alvin, came across clams in waters too deep for light to penetrate. Clams feed off algae, which, under normal circumstances, need the photosynthesis provided by sunlight to thrive. “There’s no photosynthesis around the deep ocean hydrothermal vents; it’s too dark,” explains Whitcomb, who’s helped upgrade the still-operable Alvin. “But there are sulfide compounds coming up through these vents, and bacteria can live on them. It’s a chemosynthetic ecosystem, in which chemosynthetic bacteria are the primary producers for the food chain of the entire ecosystem surrounding the vent.”

While Whitcomb, a fan of Jacques Cousteau growing up, has always been fascinated with oceanography, it wasn’t until the early 1990s that he envisioned his involvement in it. As a grad student studying robotics at Yale, he visited the Woods Hole Oceanographic Institution, home of the Alvin, and realized that “people were developing robots for ocean science, which sounded like the coolest thing in the world. I said, ‘How do I do that?’”

He accepted a postdoc position at Woods Hole, studying under Senior Scientist Dana Yoerger, and a career was launched, with Whitcomb joining the faculty at the Whiting School of Engineering in 1995. He has since helped develop several generations of navigation and control systems, earned 15 patents, accumulated academic and teaching awards, and worked with scores of graduate students and postdocs, many of whom are now robotics professionals.