Karthik Menon, a graduate student in the Department of Mechanical Engineering, has been awarded the inaugural Mark O. Robbins Prize in High-Performance Computing.

The Robbins prize was instigated in 2020 to recognize outstandingly talented PhD students who reflect Dr. Robbins contributions to computational science and engineering. 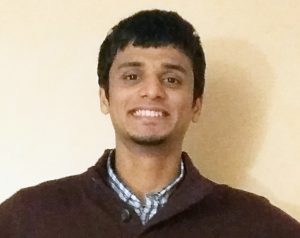 A member of the Flow Physics and Computation Lab led by Rajat Mittal, Menon was selected for his accomplishments in research that advances high-performance computing. His research focuses on the development of computational and data-driven techniques to study the interaction of fluids with flexible and moving surfaces within fluid flows. In such problems, the forces induced on surfaces by the fluid, and the resulting motion of these surfaces, is often non-intuitive and difficult to predict for several reasons. Most significant is the presence of several vortices within the fluid which exhibit complex interactions, and play a dominant role in the complicated force and motion induced on immersed surfaces by the flow.

Menon’s work uses high-fidelity computational simulations to better understand the flow physics of these problems, with a focus on the dynamics of flexible aircraft wings. The aim is to uncover the fundamental mechanisms that drive the force and motion induced on surfaces by fluid flows, and develop physics-based and data-driven tools that allow the analysis and prediction of these dynamics.

Winners of the Robbins prize will receive a plaque and $4,000 cash prize. Menon will also be invited to present his work at an ARCH-sponsored symposium on high-performance computing that will be held (in a virtual format) in August 2021.

Dr. Mark Robbins was a professor in the Department of Physics and Astronomy at Johns Hopkins from 1986 until his untimely death in 2020. He was a renowned condensed matter and statistical physicist who played a key role in supporting the development of computational facilities at Johns Hopkins, through his leadership for the Maryland Advanced Research Computing Center (MARCC) in the Institute for Data Intensive Engineering and Science (IDIES).