If you’ve ever watched a child rocket past one shirt size after another, you know that while kids grow, their clothes do not. This underscores a basic difference between living tissue, which grows over time, and dead or engineered materials, which don’t. But what if they did? Imagine a child’s shirt that expanded with its wearer, eliminating the need to buy a new one with every growth spurt.

Sung Hoon Kang, an assistant professor of mechanical engineering, is applying that concept to build 3D-printed cardiovascular implants that can change shape to keep up with the growth of their newborn recipients. He and his colleagues call the process 4D printing, with the fourth dimension being time, and Kang says it has the potential to save both lives and money by eliminating the need for multiple replacement surgeries.

Congenital heart defects affect nearly 1 percent of all babies born in the United States and are a leading cause of defect-related infant illness and death. Many of these conditions—including tetralogy of Fallot, which was first corrected surgically at Johns Hopkins in 1944—prevent the heart from pumping blood to the lungs, where it absorbs the oxygen needed throughout the body. Doctors can fix this by suturing a small conduit, or tube, between the right ventricle and the lungs during open-heart surgery. It’s a traumatic, risky, and expensive procedure.

At present, these conduits are made of synthetic materials, such as Gore-Tex, or from harvested tissue. And though they can last for years, all share the same basic limitation: They can’t get any bigger. “As time goes on, the infant outgrows the implant,” Kang says.

When that happens, the conduit must be replaced, often more than once and sometimes under emergency conditions. That means more open-heart surgeries. According to the Centers for Disease Control and Prevention, hospitalizations for congenital heart defects cost $6.1 billion in 2013.

Origami to the Rescue

Inspired by natural phenomena such as sea anemones and the human esophagus, all of which can expand in response to internal pressure—and by the work of team member David Gracias, a Johns Hopkins professor of chemical and biomolecular engineering who uses the principles of origami to build self-folding nanoscale devices—Kang used computer modeling to design a tube whose walls contain origami-like folds. When blood flow causes the pressure inside the tube to increase, the folds, which lend the device the creased appearance of a car air filter, allow it to expand by as much as 24 percent. 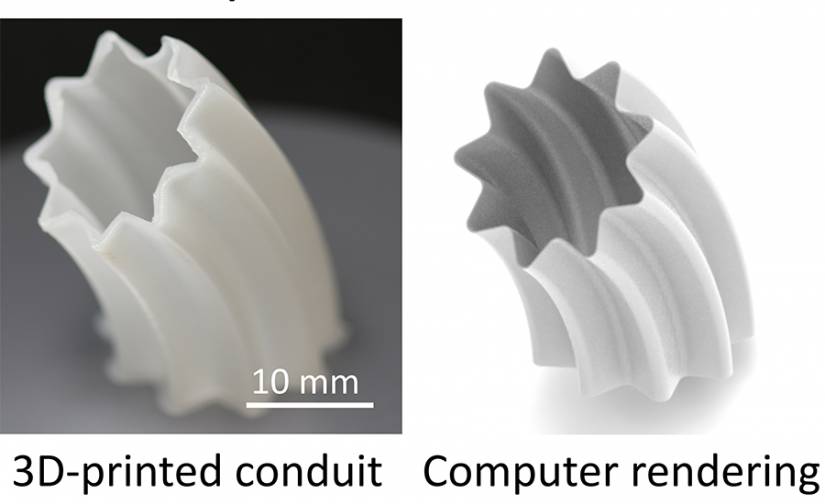 The researchers printed the tube using stretchy and durable biomedical-grade polymers. They then tested it using an experimental setup that mimics the pulsating nature of blood flow, and the increasing flow rate and pressure that accompany a growing body. By simulating the blood pressure patterns associated with different ages, the team showed that the shape-changing tube greatly reduced the amount of pressure that would otherwise accumulate and potentially cause a conventional conduit to fail.

Kang is testing various coatings on the conduit to prevent problems such as blood clots from interfering with the tube’s ability to expand. And he will soon implant the device in a pig to see how it performs in a living creature.

Within the next 10 years, Kang hopes, doctors will be able to scan the heart of a baby with a congenital defect, use design software to craft a custom-tailored conduit, manufacture it on-site with an inexpensive 3D printer, and install it in the ailing infant. The device would gradually expand over time, making it the last such operation the tiny but rapidly growing patient will ever need.

This article originally appeared in the  Summer 2019 Johns Hopkins Magazine >>